Fossils from the Collection of Stanislav Bačar

The permanent archaeological exhibition presents the settlement of the town of Ajdovščina from prehistory (middle of the 2nd millennium B.C.) to the Early Middle Ages (end of 6th and 7th century A.D.). The oldest settlement stood on the naturally protected rocky plateau Školj, 232 m high, northwest of the present-day town of Ajdovščina. During the Roman era, the inhabitants moved to the lowland near the Aquileia–Emona state road (today the Aquileia–Ljubljana road). Until the 3rd century, a road station stood in the area of today's town centre of Ajdovščina called Fluvio Frigido, named so after the cold rivers (Fluvius Frigidus) of Vipava and Hubelj. In the second half of the 3rd and in the 4th century, the road station became a military camp, protected with a defensive wall and 14 towers. The Romans called it Castra. Until the 5th century, the camp retained an important role in defending the east border of the state. The Vipava Valley, along with Ajdovščina (then called Flovius), was included in the Lombard duchy in the 6th and 7th century. In the Early Middle Ages, the inhabitants built their homes in the safety of the once mighty fortress. The place was given its Slovenian name, Ajdovščina, by the Slavs who had migrated there at the end of the first millennium. This portrayal of the settlements has been realised based on the artefacts and discoveries that came to light as a result of long-term archaeological excavations and research into historical sources. 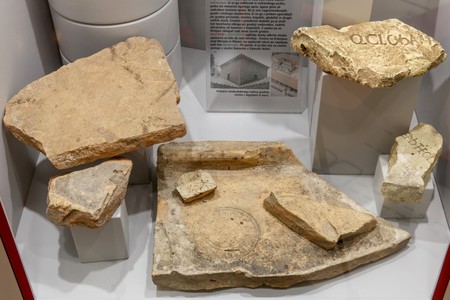