Over the decades, Franc Golob has moved in a wide media field: from painting, graphic design, photography, video, to classical and computer graphics, his artistic personality has been shaped even by activism and artistic events. When we discover and recognize his development from (pre) study beginnings to the end of studies at the Academy of Fine Arts in Ljubljana, which took place within classical art practices, to a bold postgraduate entry into the field of extended media (photography, graphic design, video …), where he operated for more than a decade, and his returning to painting, is not enough to focus on a single point.

In drawing, watercolor and painting, his oeuvre developed from realism to abstraction, with all the intermediate nuances and frequent switching between one expression and another. In the early period, he developed the figure in drawing and painting, but in his creative path he focused most of his attention on the study of nature. Most often he paints domestic and foreign landscapes, discovered during many trips, even to exotic countries, including the architecture, which can be present to a greater or lesser extent.

The rich watercolor opus of Franc Golob is marked by the abstraction of the landscape through the exploration of its structures, coloristic effects and light, with a stroke that can be calm or sketchy and impulsive. He is also interested in the concentration of color, continually experimenting with the limits this technique can withstand and thus he constantly crosses the boundaries of the classical notion of watercolor. In recent years, Golob has been devoting himself more intensively to painting, which means the continuation and synthesis of his previous research of nature. The abstract compositions of a larger format are constructed with expressive color and dynamic strokes. 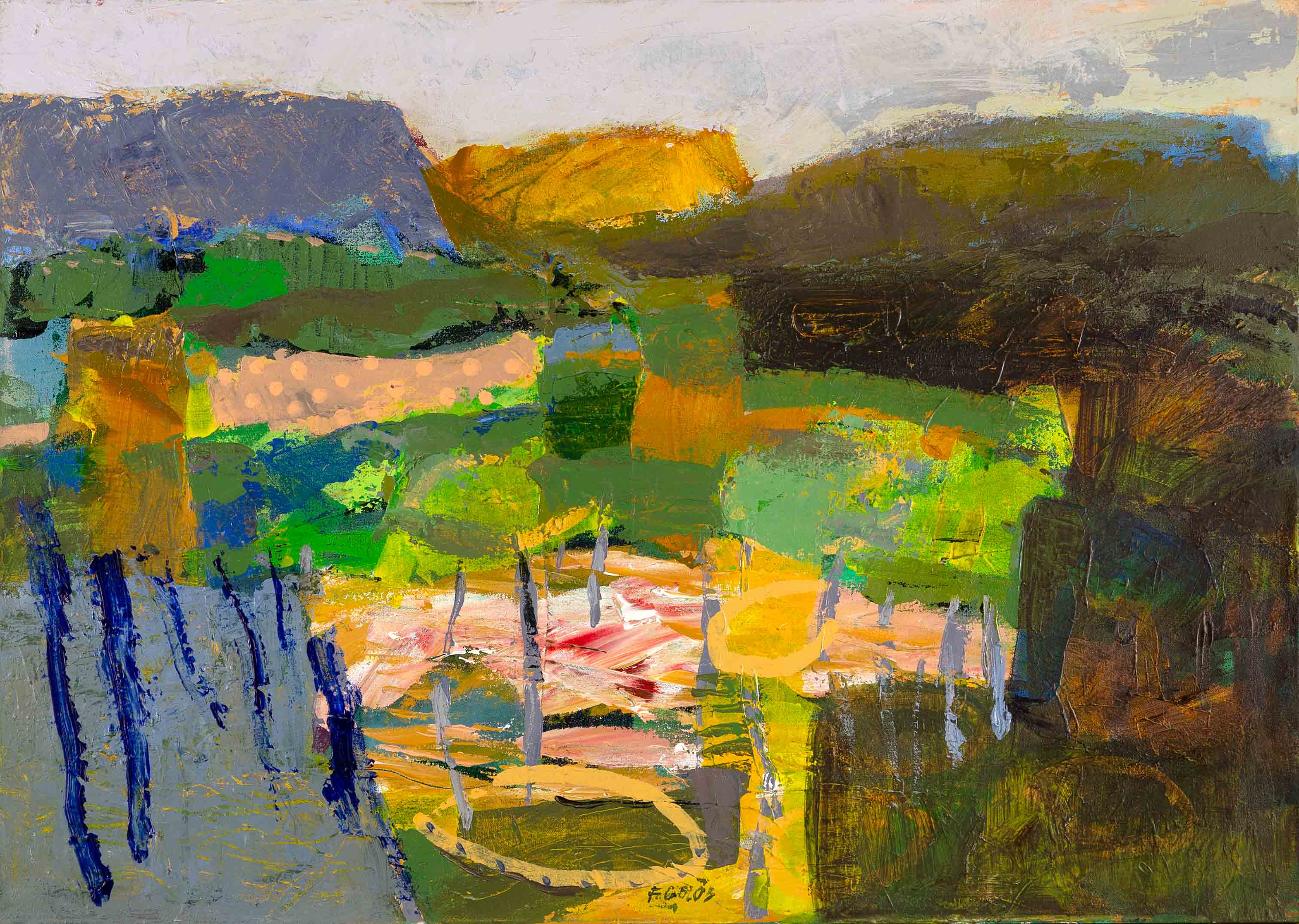 Franc Golob was born in 1941 in Celje, where he attended primary school and lower grammar school. Between 1957 and 1958 he attended the art workshop of the painter August Lavrenčič in Celje and then enrolled at the School of Design in Ljubljana, where the painters Tone Žnidaršič and Marko Šuštaršič have been teaching.

After graduating from the Academy of Fine Arts in Ljubljana in 1970, Franc Golob got a job at the Brest furniture factory in Cerknica, and in the autumn of 1972 he joined the team of designers at the Meblo factory in Nova Gorica.

At the end of the 1970s, he was invited to participate in the design of the Cultural Center in Nova Gorica. In 1982 he got employed at the Teacher Training School in Tolmin as a professor of fine arts. In the 1980s, he actively participated in the Association of Fine Artists of North Primorska (DLUSP).

In 1992, Franc Golob got employed at the Gymnasium in Nova Gorica, where he taught art history and fine arts. In 2000, at the suggestion of the then principal of the Gymnasium, Bojan Bratina, he became the founder of the Art Gymnasium with the fine arts department, which he successfully led until his retirement at the end of 2004.

After 2005, he devoted himself entirely to the artistic work. He has attended numerous international symposiums, art colonies and study trips.

He also participated in the InArte Fabriano festival in Italy, which is the most important watercolor event in Europe. In 2019, he was invited to a painting symposium in Fuiyang, China, where he worked with the greatest masters of watercolor.

In his hometown of Osek, where he also has a studio, he continues to create and plan new projects. The retrospective exhibition at the Goriški muzej is, as he put it, an opportunity for him to look at his journey, rethink it and … 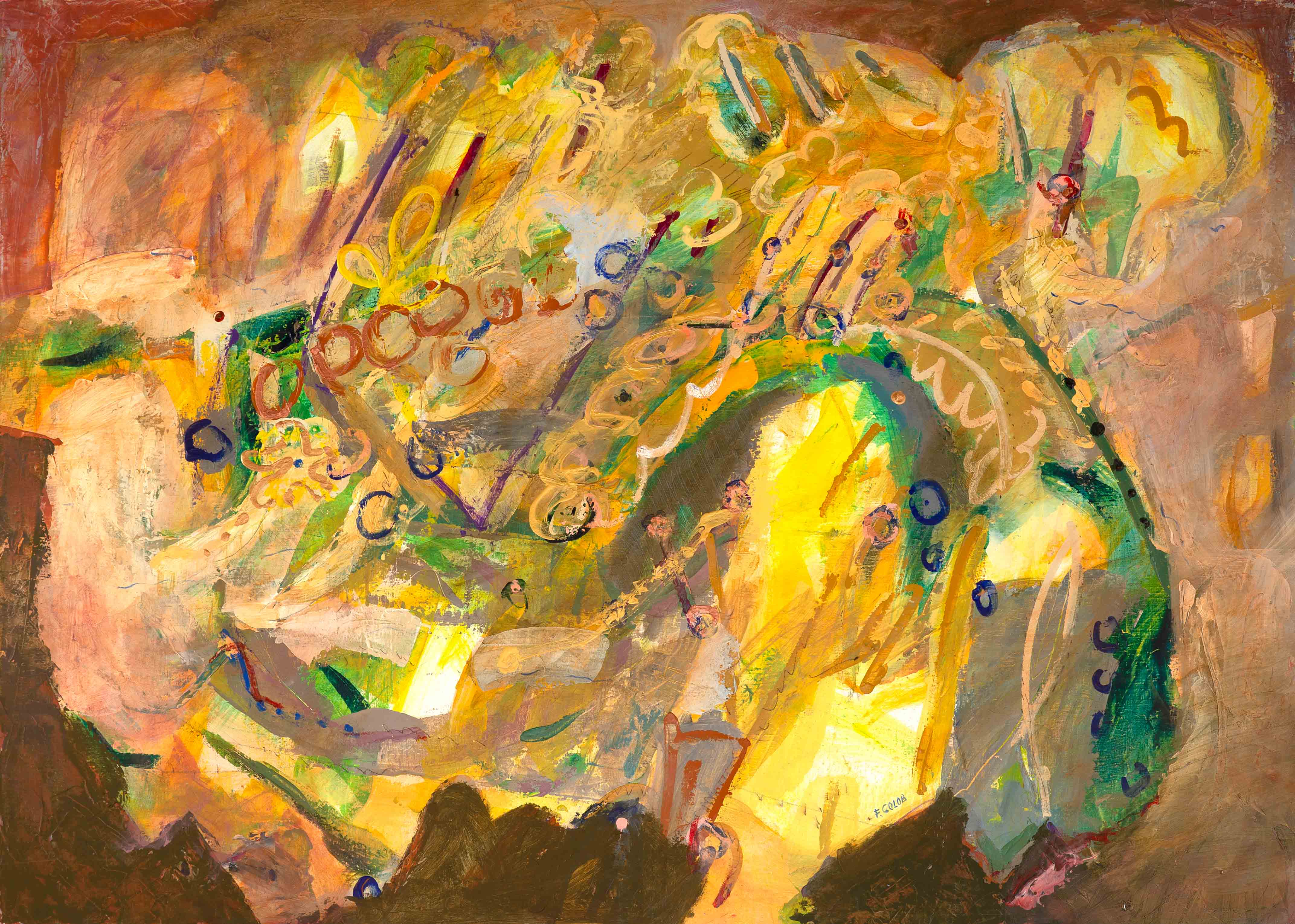